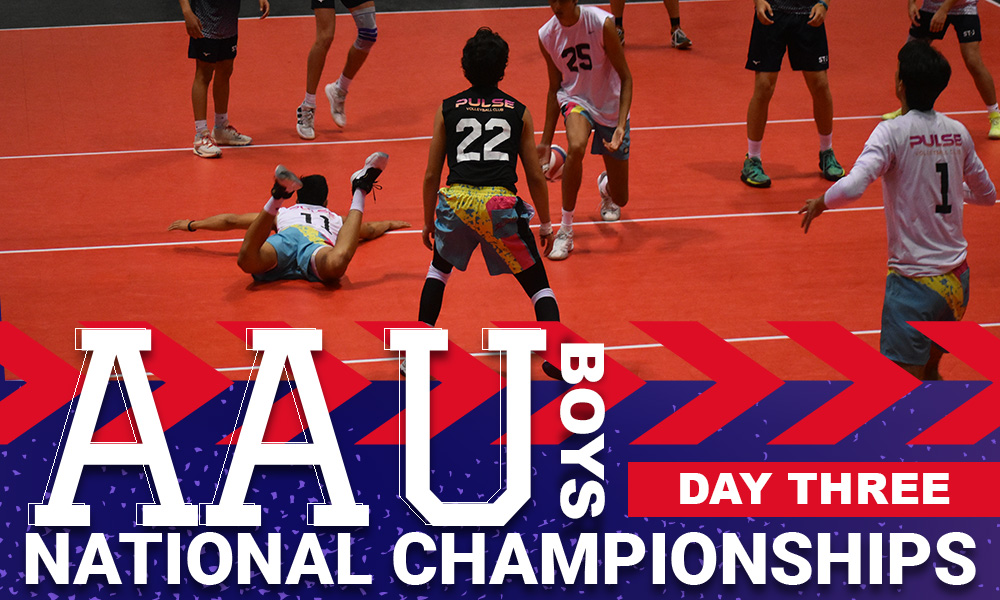 We’re three days down with just one to go at the AAU Boys National Championships, and the third day of competition was like a pressure cooker. As time went on throughout the day, the pressure just kept building and building. Now, they say pressure makes diamonds, but the question is, does it also make gold? We’ll find out tomorrow, but for today, let’s take a look at who will be moving forward, one step closer to that gold and the title of AAU National Champions.

The championship bracket is locked in for 18 Open, and 50% of that bracket is comprised of California teams. The Cali conglomerate consists of a pair of perfectionists, OCVC 18-1 and Bay to Bay 18-1, which are both undefeated at 8-0 with just a single set dropped, the lone undefeated left in the entire division. Pulse 18-1 (7-1) and MB Surf 18’s-1 Asics (7-1) round out the four-team Golden State group. Joining the California collective will be Illinois’ illest, Adversity 18 Adidas (7-1) and MOD Elite B18 Blue (6-2), the hottest team in Arizona, AZ Fear 18 JB (5-3), and New York’s very own Niagara Frontier 18 Gold (6-2).

Supernovas
Caden Sajnog, Right-Side Hitter, Coast – Sajnog was a star yesterday but was instrumental in the team’s performance on day three, qualifying him for Supernova status. He’s aggressive but intelligent, a perfect weapon on the right pin.

Bryce Robbins, Outside Hitter, AZ Fear 18 JB – Robbins was a big impact player for AZ Fear on day three and helped propel the team into the championship conversation as they enter bracket play on Friday.

Nate Degraaf, Right-Side Hitter, Vanguard 18 Gold Webb – Degraaf can score with the best of them, but where he shined on day three was on defense. He guarded zone one like his life depended on it and dug some ridiculous swings throughout the competition.

Ajani Henley, Outside Hitter, K2 18 Supafly – Henley has a crazy vertical touch, and when he gets on top of a ball, there’s a high percentage chance it isn’t getting dug. He bounced many a ball on day three all the way into the afternoon portion of the AM wave.

Ryan Steponaitis, Middle Blocker, MOD Elite B18 Blue – Steponaitis oozed energy on day three, hyping up his teammates not just verbally but with his powerful, athletic play. He was a human highlight reel on day three.

Andreas Marouf, Outside Hitter, Wave 18 Darrell – Deep into day three, when most players would be gassed, Marouf found efficient ways to score while making sure not to expend excess energy. He was consistent, clever with his shots, and sprinkled in the occasional big swing. He played big brain volleyball on day three, breaking a mental sweat.

Jackson Herbert, Right-Side Hitter, The St. James Boys 18 N – Herbert was a big catalyst for The St. James Boys’ performance on day three. While he only got to play three rotations in the team’s 6-2 offense, he made his presence known by scoring relentlessly and shutting down outside hitters.

Gavin Weed, Middle Blocker, Academy 17 Adidas (IN) – Weed utilized his great timing, fast arm swing, and ability to hi hard angles around the block to score a ton of points on day three.

Kellen Larson, Libero, Balboa Bay 17 Blue – Larson played lights out in the libero jersey on Thursday, helping defend the backcourt and propelling his team to the championship bracket.

Hudson Wooton, Middle Blocker, Balboa Bay 17 Blue – Wooton is a vocal leader on the court when he is in play and brandishes a big gun for an arm he isn’t afraid to use.

The 16 Open Division may fall victim to some California cannibalism as six of eight teams to qualify for the championship bracket hail from the Golden State. SB Coast Volleyball (6-4) will battle 949 B16 Black (9-1) in match one on Friday morning, and Team Rockstar 16Rockstar (10-0) will take on Balboa bay 16 Blue  (9-0) in match four, a battle of the unbeaten. Meanwhile, MVC 16-Joe (9-1) will have its hands full with a Bay To Bay 16-1 (9-0) team that has won every match and swept seven of nine opponents. Finally, AZ Fear 16 TS (8-2) will have the chance to eliminate at least one Cali team from contention when they take on PAC 16-MS (8-1) in the first round.

Supernovas
Christian Couch, Right-Side Hitter, Yorktowne 16 Blue – Couch is a big banger that can accurately hit the line and uses his length well.

Jacob Koch, Middle Blocker, Vanguard 16 Gold Bell – Koch was mean, mulleted, and a menacing middle on day three. He was a rock at the net and a rocket when attacking.

Ambrose Engling, Outside Hitter, MVC 16-Joe – Engling is an absolutely nasty hitter and can put up a monster block on the other side of the ball. He helped MVC pick up a pair of wins on Thursday.

Connor Mursalo, Middle Blocker, Pulse 16-1 – Mursalo displayed clinical finishing on a handful of tight transition plays that wound up being pivotal moments for the team on day three.

The 15 Open Division played late into the evening on Thursday, but when the dust settled on pool play, group play, and challenge matches, the odds fell once again in California’s favor. MB surf 15’s-1 Asics, Balboa Bay 15 Blue, MVVC 15 Red, Bay To Bay 15-1, and  Team Rockstar 15Rockstar all moved forward, one step closer to the championship trophy. Missouri’s HPSTL B15 Royal (7-1), Wisconsin’s MKE Sting 15 Adidas (8-0), and Illinois’ Ultimate B15 Gold (5-3) will look to cut down those odds and take the title back to their respective states.

Supernovas
Michael Rivera, Middle Blocker, Miami United 15 Elite – Rivera put up some big blocks on day three, all the way until the late-night challenge match to determine whether the team would make the championship bracket.

Aris Marukas, Outside Hitter, 630 Volleyball 15-1 – Marukas is as consistent as they come. He’s consistent in his passing and is a solid scorer on offense.

Logan Mainka, Outside Hitter, MKE Sting 15 Adidas – Mainka has a wicked jump serve that, when it connects, is a pain in the neck for any would-be passer.

Luke Martinez, Middle Blocker, HPSTL B15 Royal – Martinez was highly effective in the middle on day three for HPSTL. His timing and long arms make it look easy for him to score.

Grayson Bradford, Right-Side Hitter, MB Surf 15’s-1 Asics – Bradford was a brilliant blocker on day three, shining on one of the main courts. He plays with his head on a swivel, staying in the play constantly.

Devon Helmer, Outside Hitter, AZ Fear 15 SL – Helmer was one of the more consistent outsides on day three, which is a big deal considering how much volleyball these boys have played. He is a big reason AZ Fear has notched a 5-2 record thus far at Nationals.

Alexander Lee, Setter, Bay To Bay 15-1 – Lee quarterbacked a day three offense in the most efficient manner. When legs started to wear, he found ways to set his hitters up for success.

Alexander Garrett, Middle Blocker, Team Rockstar 15Rockstar – Garrett was a big reason why Team Rockstar won the team’s tightly contested challenge match to earn a place in the championship bracket. He maintained a high level of energy late into Thursday night during a heated battle with Miami United.