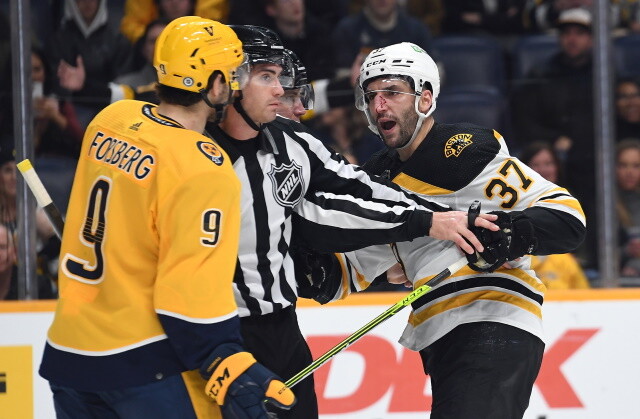 Patrice Bergeron coming back for one more season?

Joe McDonald: Have been hearing the Boston Bruins forward Patrice Bergeron is likely to return to the Bruins next season on a one-year deal.

The Predators have made Filip Forsberg a contract offer

Poile has remained confident that they will be able to re-sign the 27-year-old. Poile said it’s possible that Forsberg could take a look at free agency and see what’s there.

“Filip, in my conversations, he wants to be here,” Poile said. “It’s really down to a business decision. It’s nothing about him not wanting to be here and to go somewhere else.

“We’re trying to run the franchise correctly and what we think is the appropriate number, not only as a player for him, but it also gets into what we need to be able to put a good team together — which is Filip’s team. If we’re offering him an eight-year contract, it’s Filip’s team for the next eight years. He has to hopefully have a little buy-in to understanding that.”

Matthew DeFranks of the Dallas Morning News: The Dallas Stars and Ben Bishop have been discussing a possible management position now that his playing days are over. His playing contract has already been traded to the Buffalo Sabres for salary cap purposes.

The Stars may be looking for more cap flexibility to re-sign pending RFAs Jason Robertson and Jake Oettinger and improve by adding free agents or making a trade.

“The cap comes into play with a lot of things,” Nill said. “We’re juggling things. Can you move some money to create money? What’s out in the market? I think there’s going to be a lot of movement in the market this year.”