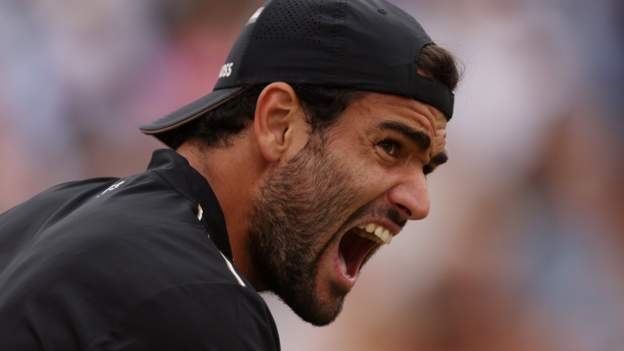 Serbia’s Krajinovic, who had never won an ATP main draw match on grass before this week, then beat 2018 champion Marin Cilic of Croatia 6-3 6-3.

The rain further disrupted the Birmingham Classic, with both women’s semi-finals postponed to Sunday.

Simona Halep will play Beatriz Haddad Maia before Sorana Cirstea takes on Zhang Shuai, with both matches available on the BBC Red Button and BBC Sport website and app.

The Queen’s final will take place on Sunday and will be broadcast on BBC One from 13:00 BST.

It will be a fifth ATP final for world number 47 Krajinovic, who smiled broadly as a long Cilic backhand confirmed his place in the final

He has never gone beyond the first round at Wimbledon in four main-draw appearances.

“To be honest, I don’t like to play on grass and every year I find a way to skip the tournaments,” Krajinovic said in his on-court interview.

“To come to Wimbledon and lose in the first round for the past 10 years… maybe it’s going to change now and I’m going to start to like it!”

He started the stronger against 2018 Wimbledon finalist Cilic, taking advantage of a loose service game from the Croat to break first.

After clinching the first set on a net cord, Krajinovic saved five break points in his opening service game of the second set, before securing an ultimately decisive break of his own.

“I just can’t believe that I am in this final – it is a dream come true,” Krajinovic added.

Berrettini has now won 19 of his past 20 grass-court matches, with his sole defeat coming in the Wimbledon final against Novak Djokovic.

He faced an hour delay before taking to the court and play was again interrupted midway through the second set.

“I guess this is the UK, no? Yesterday it felt a little bit like Italy, today it is more London weather,” Berrettini said of the delays.

“It feels unbelievable to be in the final. I am really happy.”

Van de Zandschulp started well and saved eight break points in a lengthy game at 3-2 in the first set before double faulting on the ninth.

He broke back on a Berrettini double fault as the world number 10 served for the set, but some smart net play from the Wimbledon finalist saw him close out the opener.

Van de Zandschulp dug deep to start the second set, saving four break points in two games, but the Dutchman was visibly annoyed when play was halted with him 30-40 down on serve.

After a 28-minute delay, the two returned to the court and Van de Zandschulp sent a forehand long, handing Berrettini the break and setting him on the way to victory.

Hewett loses in London but Medvedev advances at Halle

In the men’s wheelchair singles, British top seed Alfie Hewett missed out on a place in the final, losing 6-7 (6-8) 6-2 6-2 to Germany’s Joachim Gerard.

Medvedev, who will not be able to play at Wimbledon after the tournament barred Russian and Belarusian players, beat the German 7-6 (7-3) 6-3.

In the women’s event in Berlin, top seed Ons Jabeur will face Belinda Bencic of Switzerland in the final.