What the future could hold for everyone on Knicks’ broken... 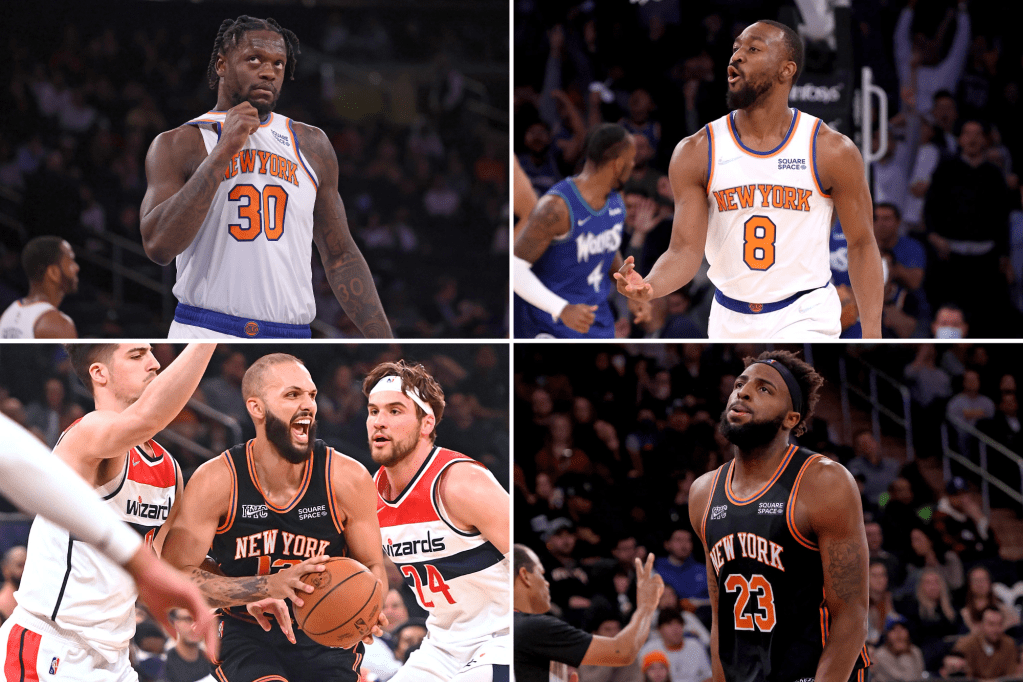 For their season finale, the Knicks were set to take the floor Sunday at the Garden against the Raptors with possibly just eight healthy bodies.

It was a fitting end as their 17-man roster — including two-way players — dropped like flies amid this 2021-22 carnage.

Only six players from their 15-man roster were definites to suit up Sunday.

Knicks president Leon Rose faces a monumental offseason in trying to keep his job and find a starting point guard.

In the final weeks, Tom Thibodeau, the 2021 Coach of the Year who likely will be kept, has shed scant light on the future plan, but said Friday the franchise knows “we still have a long way to go.’’

Here’s an analysis of each player’s future as a Knick.

When Walker left the team at the All-Star break, the Knicks refused to grant him a buyout. They view him as an expiring-contract trade pawn with $9 million that can be added to an offseason deal. Nobody expects him to wear a Knicks jersey again. Thibodeau never warmed up to Walker’s skill set.

The 33-year-old Rose’s excellence in a 35-game Knicks stretch during the pandemic-shortened 2020-21 season was short-lived. Perhaps with Thibodeau giving him too many minutes, Rose broke down in 2021-22 with two ankle surgeries and played just 26 games. He has one year left at $14.5 million and a final-year option, so he could be back as a backup point guard despite obvious risks.

Thibodeau stubbornly started Burks at point guard after the All-Star break, and he was a decent stopgap. But he’s not a playmaker and should return to his old role next season as a scoring wing off the bench.

The second-year player was arguably the Knicks’ most impressive player since the All-Star break, improving as a floor general and finding his 3-point shot to close with a bang. He’s opened some eyes in the organization as a potential starting point guard down the road.

The West Virginia rookie deserved more action on the ball, but he’s a stout pressure defender who will always have a spot on a Thibodeau roster.

Leon Rose has a thing for Villanova, so could be back as 15th man.

The Frenchman had an underrated season in which he smashed the Knicks’ single-season record for 3-pointers made, but Thibodeau’s use of him in fourth quarters was unpredictable. He didn’t defend to the coach’s liking and, with his big salary, could be on the move in the right blockbuster.

Made the leap as a go-to scorer/No. 1 option and potential All-Star, but scouts feel that’s too big a burden on a winning team because he’s not a pure outside shooter. Thibodeau wants him to defend better and spray the ball quicker next season off the double-team.

An impressive rookie season was derailed by a dislocated knee on Feb. 25, and he never regained form. But Grimes is part of the future because Thibodeau loves him and lobbied for drafting him at No. 25.

The former Hawks lottery pick had an uneventful 15-game stint after the January trade before his season-ending shoulder injury. Brass likes him better than the coach — which means expect him at training camp.

The fans turned on the 2020-21 All-Star quickly after a slow start, and it appeared to mess with the Knicks power forward’s sensitive psyche. If convinced fan-favorite Obi Toppin is their starting power forward next season, the front office will gauge trading Randle, who still can be a southpaw wrecking ball after averaging 20.1 points, 9.9 rebounds and 5.1 assists this season. But does he fit with Barrett any longer?

Starting for Randle the last four games, Toppin averaged 27 points, 5.3 rebounds on 55 percent shooting heading into the finale. But this stat matters most: He’s shooting 46 percent on 3’s on 6.8 attempts.

The shot-blocking, rim-rattling center stayed healthy, making him a marketable commodity as an unrestricted free agent whom NBA sources believe wants a change. The Pistons will pursue the longest-tenured Knick if they don’t address their center position in the draft. The Bulls, Mavericks, Pelicans and Hornets also should have interest.

The front office dedicated the post All-Star break schedule to taking a closer look at the rookie center, who showed he can be a Robinson Lite but with more playmaking ability.

The former Sixers lottery pick had a lot of baggage coming to New York but revived his image last season as a defensive menace in a contract year. Noel reverted to his enigmatic form with an injury-filled 25-game season and could be trade bait with an expiring contract.