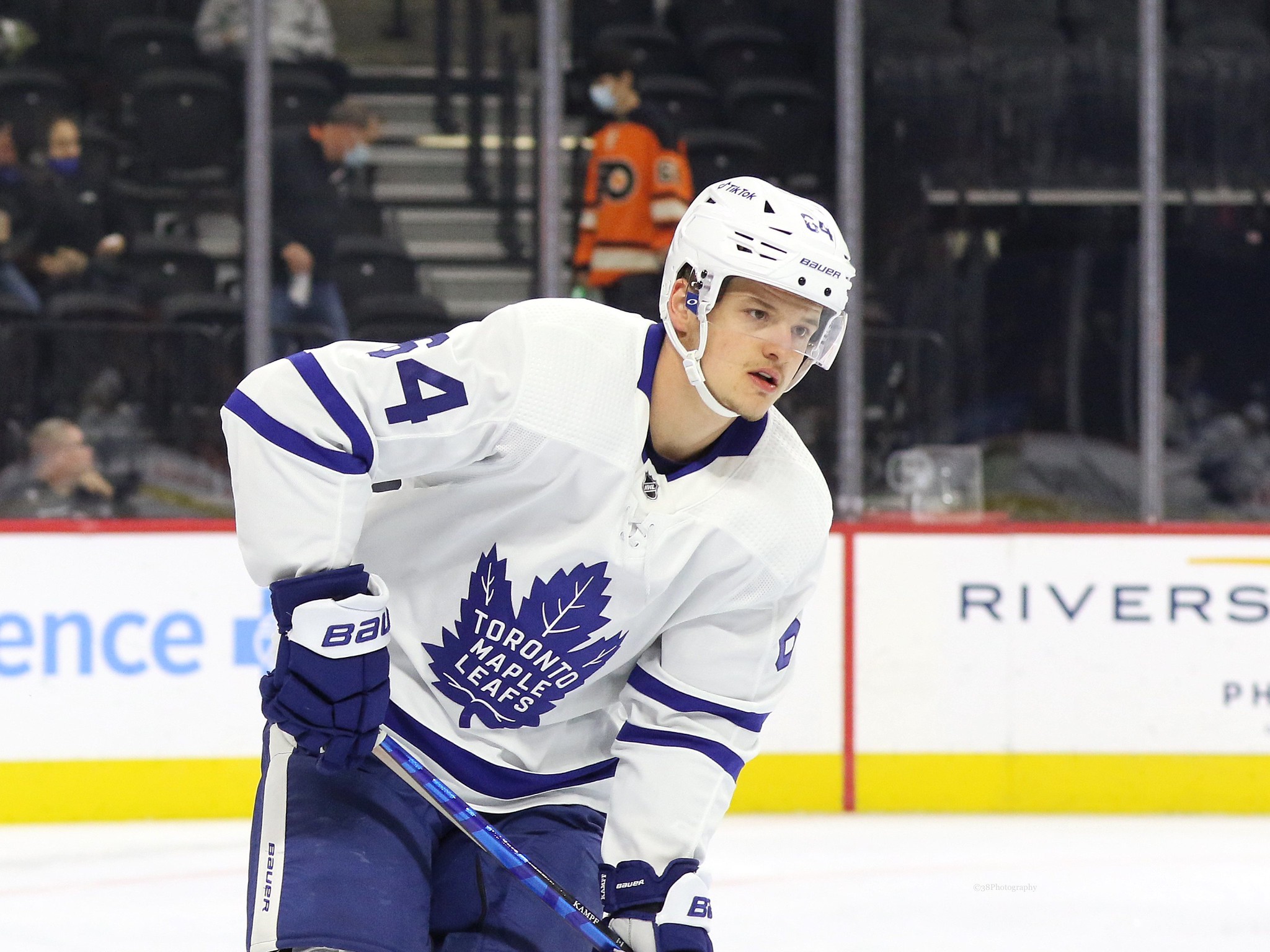 In his edition of Toronto Maple Leafs’ News & Rumors, I’ll take a look at the game coming up tonight against the San Jose Sharks and comment on some of the players as they get ready for game three of the team’s current west coast road trip.

Related: How Do Current Maple Leafs’ Players Stack Up Against the All-Timers?

I’ll also spend some talking about two of the newcomers to the team who have, I believe, added an element that’s been missing during the time that I’ve covered the team – it’s my fourth season. As well, I’ll talk about tonight’s starting goalie Joseph Woll and note what I’m looking for as part of the game. Kampf’s contribution as the third-line checking center has been a massive addition to the team’s successful play on the ice. And it looks right now that he’ll likely be in that position again tonight against the Sharks. Although the official word is that Kampf’s status has yet to be determined, it’s looking good that he’ll play.

David Kampf was a full participant in yesterday’s practice in his usual third-line spot, and he will be re-evaluated this morning. Thus far, no news. The word from Maple Leafs’ head coach Sheldon Keefe is that Kampf could be a game-time decision but that he was “trending in the right direction.”

Wayne Simmonds, who knows a bit about grit, loves the addition of the two new Czech mates – Kampf and Ondrej Kase to this season’s team. In a recent interview, Simmonds spoke about the pair’s baked-in chemistry” and added that “Those guys have a never-say-die attitude  … they literally do whatever is necessary for our team to win so they bring a lot of grit and they’ve been adding some offense as well.”

Keefe was recently sharing his insights about Kampf and Kase. Although Kampf isn’t used to scoring, Kase has a 20-goal season on his resume. He has a different philosophy than his best friend. Keefe noted that scoring has become part of Kase’s identity.

Kase, who hasn’t been given his regular career offensive deployment on this Maple Leafs’ team – including time on the power play, noted that he feels he needs to score. Kase declared that “I play an offensive style of hockey. I feel so much more comfortable if I score.”

Fortunately, for Keefe and the Maple Leafs, that Kase isn’t put into a primary scoring role isn’t a deal-breaker for his effort on the ice. Keefe has called Kase a “very low-maintenance” player and admits that he’s asked the Czech forward to do things he hasn’t done in the past – like killing penalties. That’s something Kase is doing for the first time in his hockey career.

Interestingly, Kase has added a bit of secondary offense to the third line and, as it currently stands, the line collectively is on the positive side of plus/minus statistics. Fortunately, goals or no goals, the Kase and Kampf combination has given something Keefe hasn’t had in the past – a third line he can trust to work hard every shift and, more often than not, shut down the other team’s top offensive lines.

Keefe’s final comment about Kase is that he’s consistent every game. “He (Kase) hasn’t questioned it or let it affect anything,” Keefe said. “Whatever we’ve asked him to do, he’s embraced it.”

Joseph Woll gets the third start of his NHL career tonight against the Sharks. Thus far on the season, Woll has not lost a game. He was a bit wobbly in net against the Sabres in Buffalo but he was steady as a rock a week later in his shutout against the New York Islanders.

Is it possible the 23-year-old Woll could stay unbeaten in this road game against a Sharks’ team that’s gone 10-8-1 on the season and comes into the game with a two-game winning streak? If so, it not only gives starter Jack Campbell a rest but also will make Maple Leafs’ fans wonder if the team might now have an answer to its future goaltending problems. On the season, Woll has put together a 2-0-0 record with a goals-against-average of 2.00 and a save percentage of .915.

What’s Next for the Maple Leafs?

Obviously, the game tonight in San Jose is the first order of business on the Maple Leafs’ agenda. It will be the team’s third game of their current road trip; and, so far they haven’t lost.

Two things are on my personal watch list for the game. Can Woll get another win? And, can Nick Ritchie score? I loved the way the team worked their tails off to help him get his first goal of the season against the Kings. For me, that says a lot about the culture of the team and perhaps the organization.

As my readers know, I’m both a Maple Leafs’ fan and am positive about this team.

The Old Prof (Jim Parsons, Sr.) taught for more than 40 years in the Faculty of Education at the University of Alberta. He’s a Canadian boy, who has two degrees from the University of Kentucky and a doctorate from the University of Texas. He is now retired on Vancouver Island, where he lives with his family. His hobbies include playing with his hockey cards and simply being a sports fan – hockey, the Toronto Raptors, and CFL football (thinks Ricky Ray personifies how a professional athlete should act).

If you wonder why he doesn’t use his real name, it’s because his son – who’s also Jim Parsons – wrote for The Hockey Writers first and asked Jim Sr. to use another name so readers wouldn’t confuse their work.

Because Jim Sr. had worked in China, he adopted the Mandarin word for teacher (老師). The first character lǎo (老) means “old,” and the second character shī (師) means “teacher.” The literal translation of lǎoshī is “old teacher.” That became his pen name. Today, other than writing for The Hockey Writers, he teaches graduate students research design at several Canadian universities.

He looks forward to sharing his insights about the Toronto Maple Leafs and about how sports engages life more fully. His Twitter address is https://twitter.com/TheOldProf