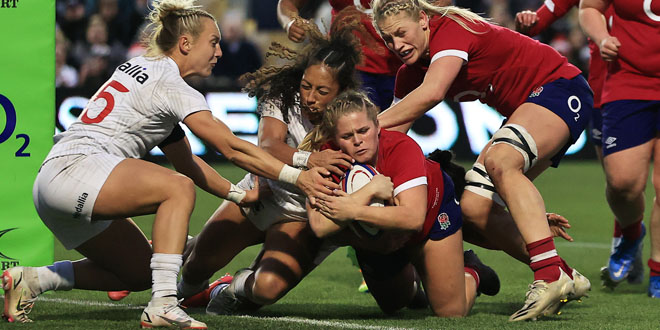 The USA were given a harsh lesson at Sixways on Sunday as they suffered a record 89-0 defeat at the hands of England. There were five tries conceded by halftime but it was a 60-point second half by the rampant Red Roses that will have been most frustrating for the Women’s Eagles.

It was the worst possible start for the Eagles as Vickii Cornborough bashed over the line with just 90 seconds played. Just over three minutes later and Abby Dow broke four tackles to score a solo effort that began inside her own half.

Lydia Thompson was next to get in on the action as she celebrated her 50th cap with a try in the right corner. Before halftime there were two more for England through hooker Lark Davies at a maul and sniping scrumhalf Leanne Infante.

The second half was one-way traffic as the Red Roses poured on the heat with 10 tries in all. Thompson and Davies each scored a second with Sarah Bern also grabbing a brace. Singles came from Lagi Tuima, Zoe Aldcroft, Helena Rowland, Heather Cowell, Connie Powell, and Holly Aitchison.

England head into a World Cup year as clear favorites after recording their 18th consecutive test victory. For the USA it’s four defeats from four to end the year and much work to be done before their tournament opener in New Zealand next October.