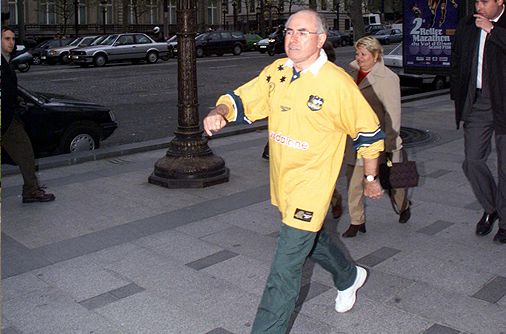 Happy Festivus Gaggers & greetings from The Ponderosa for the last time in 2021.

And what a Friday it is to go out on.

Today, let’s park the events of last week which were sensationally covered in a podcast earlier this week, widely regarded as the ‘best ever‘ in the history of podcasts and instead look forward with World Rugby essentially confirming the RWC is headed our way in 2027 (surely we should start planning the official G&GR tour to attend – court orders prevent me from being treasurer or holding any ‘official’ position on the organising committee). Let’s look at the details surrounding World Rugby’s relaxation of eligibility laws. The Ponies confirm they are going back to the future with Bernie Larkham appointed for 2023. We’ll cast an eye over the farewell game for SH players in this week’s Baabaas fixtures. And round out the Rugby year for 2021 with ‘A Rugby Christmas Carol’ guaranteed to fill a stocking with delight, in lieu of the Friday Fast 5 Bonus.

So strap yourself in and off we go one more time……….

RA lunch boy and my new BFF, William Nathanson reports on rugby.com.au that World Rugby has announced Australia as the ‘preferred candidate’ to host the RWC in 2027!

I must admit that from a distance the whole ambition has been professionally run from start to finish, thanks in no small part to Hamish ‘The Hammer’ McLennan’s handling, vision and business acumen (yes I am trolling for free tickets or at least accredited ‘media’ status for the gig. FFS if that dill at RA, if that excellent journo William can get one, well…………..?????).

From appointing a ‘board’ comprising the likes of Sir Rod Eddington, John ‘Nobody’ Eales, former PM and proud Wallaby tracksuit wearing fan, Dick Smith. With bid oversight from failed FUX commentator P Kearns and to the countless others whom I don’t know, it seemed a well oiled machine and you need only look at the likely outcome to gauge their efforts.

Having been to a number of the games in 2003 I can certainly vouch for the ‘spectacle’ of the games & the unforgettable camaraderie of fans at the event.

However, think for a moment what hosting rights for 2027 might mean in the run in to 2027 and the ‘legacy’ both in terms of goodwill for the game and not so insubstantial war chest of funds AKA cold hard cash, RA will have a compelling value proposition to present to every single stakeholder of the game. Think for a moment on what this means for player/coach retention & recruitment, corporate sponsorship, media partners & the value of broadcast packages, state structures et al. Every single component of RA’s universe could benefit from this on one proviso – it’s handled well.

And by ‘handled well’, I mean negotiating from a position of strength for sure, but from respect and longevity as well. For elephants may have a wonderful memory, but money has an even deeper memory. Of course their is massive opportunity to fill RA coffers, but of equal importance, there is opportunity to grow the code and attract generational sponsors and structures to see the code in rude health for at least 20 years.

But back to where I started. You bloody bewdy RA and well done all involved. Fantastic news. Now as custodians of our great code, show us all over the coming months you have a well developed plan in place so we don’t piss away the opportunity and the rugby goodwill that will be generated, you now, like your predecessors did post-2003.

What the bloody hell is happening at World Rugby?

In troubling and unusual times, World Rugby has actually made a decision based on common sense, helping smaller and struggling Rugby nations and with an eye to growing the code, WT holy F?

From January 2022, a player will now be able to represent another country after a stand-down period of three years.

A player can move to a nation of their birth, of that of their parents’ or grandparents’, but can only switch allegiance once. Consideration will also be given if you can spell a nations name, ever visited on a lay-over (must have left the airport), did a Year 8 Geography presentation about it or have ever googled accommodation in that country.

One can only wonder at the many hypotheticals that could arise from this.Imagine if you will Nella Tupou. He runs out in orange for the 2023 RWC final and gets us home against the French. He then goes to the English Premiership for 3 years on $1.5m per and changes allegiances and runs out for Tonga against the Wallabies in the 2027 RWC!

It’s kind of a global ‘draft’ where power has been handed back to the players – great call for mine.

Wonder how strong NZ rugby will be now that they can’t poach, encourage all the PI talent around them to the poxy isles long-term…….

Thumbs up World Rugby, thumbs up.

Do what you always did………

The Puppy Killers of Australian Rugby The Brumbies have confirmed the worst kept secret in Oz Rugby. Well, since he announced he was leaving Oirland for ‘a coaching opportunity closer to home’ yesterday anyway, Steve ‘Bernie’ Larkham is returning as head coach from 2023 onwards. With Chuckles McKellar moving to the Wallabies set-up full time at the end of 2022 (what odds he will be the main man for the Wallabies post the 2023 RWC, especially now we are specials for 2027 RWC hosting rights) the scene was set for the return of the prodigal Ken Berran.

I get the attraction. Under Larkham the Brumbies made the finals each year he was head coach in what was a competition with more sides and travel, admittedly they never actually got the chocolates, but they were unquestionably the premier Oz side of that time, well apart from 2014 when perhaps the greatest Provincial side to ever grace a paddock ruled the rugby world.

One could argue that under the steady hand or Chuckles & Lord Laurie, a production line of talent, strong culture AND off-field stability, success and profits that Larkham is returning at a very good time.

I had thought Simon Cron might be a good investment, but working under Steve Hansen (cue a thousand different Richie jokes here) would be a powerful incentive for any young coach to leave. And one inescapable fact has always rung true: a strong Brumbies team is good for Oz rugby and by default, good for the Wallabies

So go well Mr Larkham and commiserations against the Tahs.

Not only the lament of an amorous, but slow of foot Kiwi, but also a licence to to play expressive, footloose and fancy -free running rugby for those in the fabled black and white ‘hooped’ jersey this weekend.

It’s the last roll of the rugby dice in 2021 for a plethora of Wallabies this weekend when they trot out for the Baabaas in a game that interrupts a solid week of drinking for those involved.

Wallaby coach Moses Rennie has the reins and I think it’s probably a welcome distraction for him given Northern Tour nudie run results and farging incompetent refs, easy Hoss, easy, ‘serenity now, insanity later‘, from the questionable officiating experienced up North. Eleven (11) Wallabies have been named in the 24 man squad to take on Samoa

I don’t suppose we should be reading a whole lot into what is essentially an end of year piss up with a game of rugby used as the excuse (why do you need one!) but I will watch the replay with interest with James ‘Jon Snow’ O’Connor at #15 AND Rob ‘The Mule’ Leota at 7.

I put the orange #15 for RWC23 in the same boat as the orange #2. The jerseys are open to those who demand it through consistent form. I get Tommy ‘Bastards‘ Banks and Reece ‘The Clydesdale‘ Hodge were injured but even when fit neither really cemented the jersey in my opinion. In fact. almost in direct response to some public comments from Moses, QPRP Coach The Padre, has confirmed he will run ‘Jordan of Nazareth’ at #15 next year in SRP to throw down the challenge.

I acknowledge perhaps I am being slightly unfair to Bastards and The Clydesdale. In Tom Banks, I accept his form had improved prior to getting injured, but in small measures, compared to say a Sideshow Bob whose improvement over the same period was exponential. But in my eyes Reece Hodge’s greatest value to the Orange Ones is his versatility from the pine highway that allows for various other manoeuvring of the overall configuration of the Wallaby match day 23.

Not only are the Baabaas men running out against Samoa, but the Women’s Baabaas side is also taking on the South African women’s team as part of the Tasmanian Government sponsored ‘double header’ Saturday (Soap Dodgers’ time) of Rugby at Twickers.

Here’s hoping all players involved have had a great week in camp and enjoy the experience at Twickers in their final Southern Hemisphere ‘hurrah’ for 2021.

All teams & times can be found here, courtesy rugby.com.au

T’was the nite before Christmas

and all through the house

Not a creature was stirring

As coach Moses wrestled his doubts

as the bluddy hid coach

He paced across the floorboards

as he sipped on a Speight’s

and glanced at a team sheet

and thought ‘thus mob’s not great’

‘What’ll I do if Quade rules us out

And don’t get me started about bluddy 2,

‘And who should play lock

although there’s some choice

If only Big Willy could jump

‘And just how do I wrest beck

some wuns over the dutch

Sure, Raelene said the job was hard,

But should et suck quite thus much?’

‘If only I could turn to Johnno

for some sagely advice

But no one’s really sure what he does,

So it makes you thunk twice’

So there sat coach Moses,

slumped back in his chair

Some empty cans of Speight’s

and the smell of despair.

Self doubt and uncertainty,

That had partnered with age

Were soon replaced with resolutuion,

I’ve still got thus’ he thought.

‘I am stull up for the fight’

‘The results were so close,

‘It drives me quite bonkers.

And let’s face it, I’d have two more wuns

If not for thet deckhed Jonkers’

As he got to his feet

his resolve had now focused

‘I kin bloody do thus’

He drew a deep breath

And exhaled with new belief

to his great relief

He grabbed another Speight’s

and relaxed in his chair

and his sense of despair

Sure there had been wins

and the occasional losses

But what did he care of the thoughts

of some wunka called ‘Hoss’ was.

‘I’ll show that lot on G&GR

Chinese Year of the Wulluby!’

As I sit at The Ponderosa

Merry Xmas to all

and to all, a goodnight.

Big shout out & my thanks to all the G&GR contributors for 2021. KARL, Yowie, Briz, Happyman, KB, Nutta, Charlie, Sully, Steve & those I have undoubtedly missed. At the start of the year when a traitor, cadet journo and Chair of RA Christmas Club left these pages, G&GR seemed to be on its last legs. But cometh the hour, cometh the man (& Yowie) and thanks to the efforts of those listed above, G&GR lives again and is truly a self regulating, 100% rugby fan-powered site like no other I know of.

Lastly and most importantly, special thanks to all of you who read this shite, share your opinions, wisdoms & insights, agree & disagree, laugh and generally just avoid work. You absolutely give this sight its soul.

From my family to yours. Enjoy the festive season, stay safe, stay happy & see you back here in 2022.