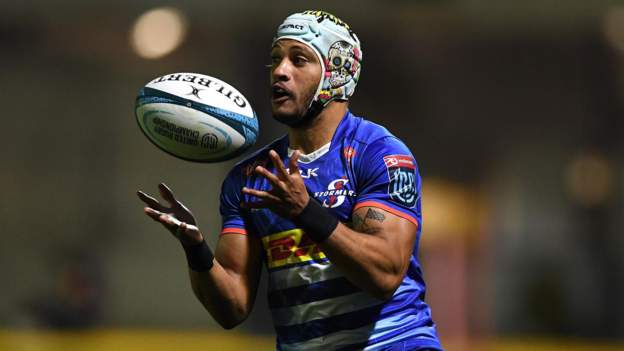 A Josh Lewis try and Sam Davies’ boot was countered by three Libbok kicks as Dragons led 10-9 at half-time.

Dragons also lost hooker Elliot Dee in the first half through injury which will be a concern for Wales coach Wayne Pivac ahead of the autumn Tests.

The home side were looking to build on their first league win in Ireland since February 2015 against Connacht last weekend, while Stormers drew 20-20 with Edinburgh after two defeats.

Former Dragons prop Brok Harris was named in the Stormers front row. Harris returned to Rodney Parade after leaving the Dragons at the end of last season to return to South Africa and led the side out.

It was Harris’ current side who took the lead with a Libbok penalty, before Stormers captain Salmaan Moerat was shown a yellow card for a high tackle on Wales squad flanker Taine Basham, who was again outstanding.

Dragons took advantage with Lewis latching onto Davies’ grubber-kick to mirror the try scored against Ospreys on the opening weekend of the season. Davies converted and added a penalty as the hosts scored 10 points with the extra man.

Dragons saw Dee taken off to be replaced by Taylor Davies before two Libbok penalties reduced the half-time deficit to one point.

Tempers flared in the second half briefly before captain Moriarty was briefly forced off the field with a nose injury.

Stormers’ scrum dominance yielded penalties before they were initially repelled by some brilliant Basham defence.

The relentless pressure told when full-back and man-of-the-match Warrick Gelant’s clever chip-kick was gathered by Zas before Libbok slotted over his fourth penalty.

Dragons chased victory but lost possession from an attacking scrum and Zas chased down a long-range kick to clinch the win.

Dragons director of rugby Dean Ryan: “I liked us today. We were physical, threatening and caused them all sorts of problems in the first half and if we could have kept more of that in the second half we could have gone on and won the game

“I thought at half-time we saw the best of us when we could go multi-phase and go quick. They spent a lot of time trying to slow that game down and make it a set-piece game.

“We probably could have done with a bit of support in speeding that game up.

“Second half we struggled to get that in and they were quite conflicting halves. Even when we did get out we tended to snatch at things and that is the piece we need to keep getting smarter at.”

Stormers’ former Dragons prop Brok Harris: “It was unbelievable coming a full circle and me getting a closure in front of the Rodney faithful with victory for the Stormers on top, though I’m gutted for the Dragons.

“The crowd reaction was pretty special, it was hard leaving the Dragons without a proper farewell from the fans, so I’m privileged to stand here and say goodbye to the fans, and to a great chapter in my life and my family’s life.

“We’re working hard off the field, adjusting to the Northern Hemisphere style of play and this meant a lot in the last game of the tour.”