NHLers by Country: On Top of Their Game and the... 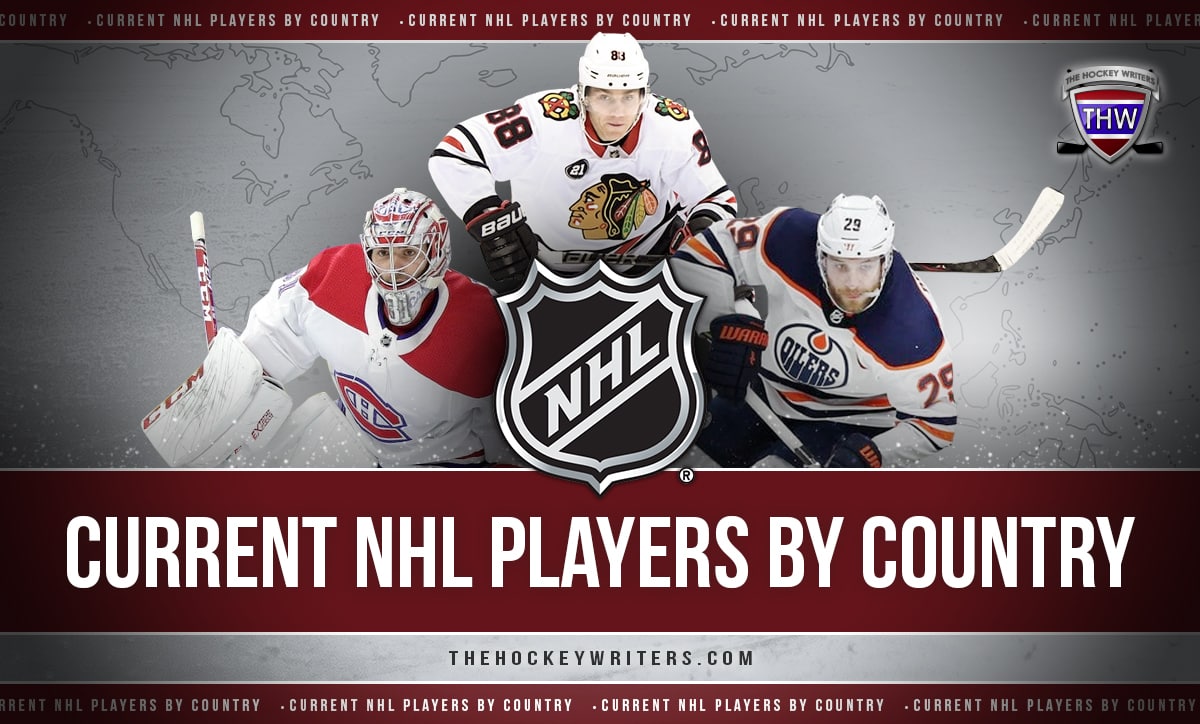 It may be called the National Hockey League, but it sure feels more like it could be an international one. Of course, the now-defunct International Hockey League was in operation for decades, but as a North American farm league for NHL teams. Still, there’s nothing purely North American about the NHL, not any longer anyway, not based on a birth-country-by-country breakdown of its 721 players, listed on team rosters at the start of this 2021-22 season:

As one might expect, Canada still reigns supreme in terms of which country’s players are the most well-represented in the NHL. However, Canada’s lead is slowly but surely dwindling.

Of the 721 players on season-opening rosters, 310 of them, or 43.0%, are from Canada. However, five and a half years ago, it was roughly half, while in the 1980s it was over three quarters. Needless to say, it’s not just a Canadian game. It’s everyone’s now.

Hockey is as popular as it’s ever been in the States, which is not just emphasized by the number of NHL players, but the success of its international teams. Granted, two Olympic silver medals for the men’s team since the turn of the century is hardly ground-breaking, but the women’s team is routinely a contender, winning the gold in South Korea in 2018. What’s maybe more of a testament of their strength is their five straight International Ice Hockey Federation world titles from 2013-19.

Technically, Gus Forslund was the first Swedish player in the NHL, back in the 1932-33 season. However, he moved to Canada with his family at a young age. It took four more decades for defenseman Thommie Bergman to seriously start blazing trails for his fellow countrymen, primarily as a Detroit Red Wing over an eight-year career.

Albert Pudas was technically the first Finnish-born NHLer. He was also technically an original Toronto Maple Leaf, with the St. Pats changing their name during his first and only season in 1926-27. He only played four games, without scoring a point, though. Pudas was also raised in Canada, meaning center Matti Hagman, who played four seasons instead, is credited as the first.

Russian players unjustifiably get a bad reputation for being enigmatic, but the skills of those that make it to the NHL cannot be denied. Russian players have helped to shape the modern era of the NHL, from the first Soviet NHL player in Sergei Pryakhin to defectors during the Cold War led by Alexander Mogilny, to the Red Wings’ famous Russian Five. The threat of departures to the Kontinental Hockey League looms large over the heads of general managers, but if the talent is there Russians will always be attractive options during the NHL Entry Draft.

Notable Russian Player: Tampa Bay Lightning forward Nikita Kucherov actually wasn’t included on the team’s opening-night roster last season due to injury, but he re-represents his home country here. After leading the league in playoff scoring en route to helping the Lightning capture a second straight Stanley Cup, he’s clearly no worse for wear and as good a representative as any.

Ever since the Czechs won gold at the 1998 Winter Olympics, they’ve been seen as a major world power. Truth be told, since the official birth of the Czech Republic in the early 1990s, they’ve always been up there. From 1995 until 2001, they medalled every year in either the Olympics or the International Ice Hockey Federation World Championship.

Notable Czech Player: Columbus Blue Jackets forward Jakub Voracek is now the active points leader among Czech players (Jaromir Jagr, as if there was any doubt). There’s really no risk of Voracek catching him though, with Jagr holding a nearly 1,200-point lead over his compatriot.

Switzerland holds steady year over year at 10 NHL players. Of course, to be fair, that does include Anaheim Ducks rookie Mason McTavish, who grew up Canadian. He did play in Switzerland instead of the the Ontario Hockey League during the shortened 2020-21 season, for what it’s worth.

Notable Swiss Player: Despite playing in the shadow of ex-teammate and defensive partner Shea Weber for his first few seasons, Nashville Predators defenseman Roman Josi has come into his own as one of the league’s premier defensemen, winning the James Norris Memorial Trophy in 2020.

The most famous Slovakian NHL player was also its first in Canadian-raised Stan Mikita. The Black Hawks great passed away in 2018 as a Hockey Hall of Famer and arguably one of the greatest of all time, whatever the country.

Notable Slovakian Player: Forty-four-year-old Zdeno Chara is getting up there, but he still leads the Slovak NHL contingent, even he’s been relegated to more of a depth role in recent years. Most recently, he signed with the New York Islanders, the team that drafted him back in the day, making everyone feel nearly as old as he is, in the process.

Historically speaking, some may think Germany doesn’t have a significant presence in the NHL. Germans actually have a Stanley Cup-winning goal to their credit though, with Colorado Avalanche defenseman Uwe Krupp ending a marathon three-overtime Game Four in 1996.

Notable German Player: Oilers forward Leon Draisaitl may be seen simply as the guy who rides shotgun with McDavid. Nothing could be further from the truth, seeing as he got drafted high (the highest of all Germans ever at No. 3 overall in 2014, now tied with Ottawa Senators rookie Tim Stutzle) on his own merits. Furthermore, he also won the Hart Memorial Trophy as league MVP in 2020.

Hockey in Denmark has been on the rise for a few decades. Its latest wave of success coincided with Frans Nielsen’s debut in the NHL in 2007 with the New York Islanders. There have obviously been more Danish players to make their debuts since, but few had the same staying power, with Nielsen playing up until 2021, before his contract was bought out by the Detroit Red Wings.

Latvia – 4 (0.6%): Buffalo Sabres forward Zemgus Girgensons did make the All-Star Game that one season. Even if it drew attention to the faulty system, it still counts. Blue Jackets goalie Elvis Merzlikins has probably been passed the torch at this point though, even if he’s splitting goaltending duties with Joonas Korpisalo.

Austria – 2 (0.3%): With Thomas Vanek retired, the mantle of most notable Austrian-born NHLer has been passed on to Colorado Avalanche forward Andre Burakovsky, who represents Sweden internationally. If you’re going for Austrian through and through, then maybe Dallas Stars forward Michael Raffl.

Bulgaria – 1 (0.1%): New York Rangers goalie Alexandar Georgiev is a dual-citizen of Bulgaria and Russia, but he was born in the former country.

Estonia – 1: Islanders forward Leo Komarov is actually Estonian, even though many believe he’s Russian based on his last name. He also represents Finland internationally, just in case you weren’t confused enough.

Kazakhstan – 1: Dallas Stars goalie Anton Khudobin is originally from Kazakhstan, but plays for Russia on the world stage.

Slovenia – 1: Los Angeles Kings star Anze Kopitar is also the first Slovenian to ever play in the NHL, setting a great example for aspiring hockey players in his country.

Netherlands – 1: While just 24, Daniel Sprong has bounced around quite a bit in his short career, and now calls the Washington Capitals home.

Belarus – 1: New Jersey Devils forward Yegor Sharangovich had a fairly productive 30-point rookie season in 2020-21, made all the more impressive by the shortened season. He puts Belarus on the map and this list, here.

United Kingdom – 1: After a season playing overseas in Switzerland, Brendan Perlini returned to the NHL, signing with the Edmonton Oilers, effectively single-handedly adding the U.K. back on this list. Hopefully his play this season keeps him and his birth nation in this piece.

Uzbekistan – 1: Kings prospect Arthur Kaliyev made his team’s opening-night roster, officially acting as Uzbekistan’s lone representative on this list in the process. Technically, though, having been raised in the U.S., he’s American for all intents and purposes. Kings fans probably couldn’t care less, as long as he’s theirs.

After 10 years of writing hockey, Ryan decided it was as good a time as any to actually join The Hockey Writers for the 2014-15 season. Having appeared as a guest on such programs as CBC Radio One’s Daybreak, Ryan has written for such publications as the Montreal Gazette and Bleacher Report and worked for the NHL itself and his hometown Montreal Canadiens. He currently writes about all things Habs for THW, with it being a career highlight for him to cover the 2021 Stanley Cup Final as a credentialed member of the press.