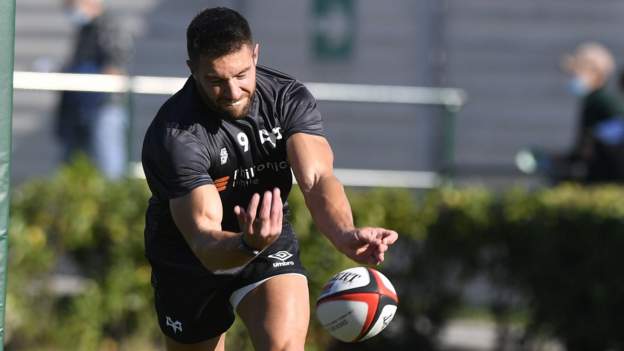 After Benetton’s hooker Gianmarco Lucchesi opened the scoring, Ospreys responded with tries from Max Nagy and Ethan Roots and a Rhys Webb double to take a 26-7 lead.

Rhyno Smith, Monty Ioane and Tommaso Menoncello hit back to level the scores.

Myler stepped up to deliver the match-winning kick.

His half-back partner Webb had earlier reminded Wales coach Wayne Pivac of his talents with his two tries, while he created another score.

Webb has not been picked for Wales since the 2020 autumn international campaign with Kieran Hardy, Gareth Davies and Tomos Williams preferred by Pivac this week for the upcoming series.

Wales wing Alex Cuthbert finally made his Ospreys debut after his regional rugby return had been delayed because of injury.

Hooker Elvis Taione also made his first Ospreys start in a side showing 11 changes from a 27-13 defeat at home to Sharks with Alun Wyn Jones, Owen Watkin, Luke Morgan and Webb the surviving starters.

Gareth Anscombe, recalled to the Wales squad this week, was left out and replaced at outside-half by Myler, while British and Irish Lions lock Adam Beard was also rested.

Hooker Lucchesi dived over for the opening score through some weak Ospreys defence with Tomas Albornoz converting.

The visitors’ early woes continued when wing Luke Morgan was shown a yellow card for a deliberate knock-on.

Wing Ioane looked like he had scored a second try for the hosts, but superb defensive work from Cuthbert mean he just bundled his opposite number into touch.

Some Webb magic, with a dummy and a reverse pass, allowed number eight Roots to canter over with Myler converting as Ospreys secured a 12-7 half-time lead.

Webb switched from creator to try-scorer early in the second half after putting Watkin through the gap and popping up on the centre’s shoulder to finish the move.

Ospreys skipper Webb followed up with a second score for the bonus-point try before Benetton’s replacement fly-half Smith scored an inventive try after collecting his own chip.

Smyth then collected a loose Webb kick and carved out a chance for Ioane who sidestepped Nagy to sprint over.

Ospreys were reduced to 14 men again when wing Cuthbert was shown a yellow card for a high tackle on Michele Lamaro.

Unlike the first half, Benetton took advantage of their extra man with wing Menoncello scoring the bonus-point try and Andries Coetzee’s conversion levelling the scores.

Myler had a chance to restore Ospreys’ advantage, but pulled a 74th-minute penalty attempt wide before redeeming himself two minutes later to clinch victory.

Ospreys captain Rhys Webb: “We were very disappointed with our performance against the Sharks last weekend so we came back into training and knew we needed to put in a big display for Ospreys, the jersey and our fans.

“We dug in for the 80 minutes against a tough side and not many teams will come over and get the five points, so it’s a good step in the right direction.”