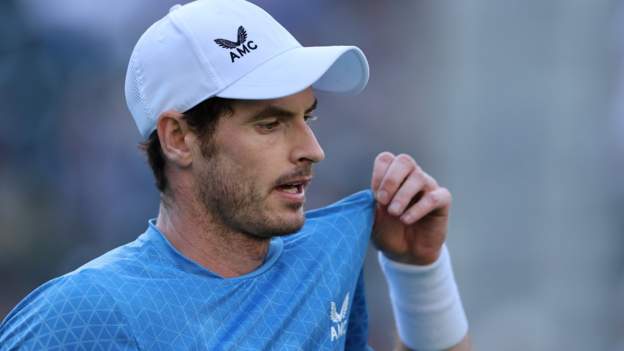 Andy Murray plans to skip next month’s Davis Cup Finals because he is “not sure he deserves to play in that team”.

Murray, 34, was knocked out of the Indian Wells Masters in the third round on Tuesday night in a 6-4 7-6 (7-4) defeat by Alexander Zverev.

“I’ve given a lot to the Davis Cup, and sometimes to my own detriment physically,” he told BBC Sport.

“The same thing happened last time I played Davis Cup at the end of 2019. I know there was coronavirus, but I was struggling with that really up until September time the following year.”

Murray suffered bruising to his pelvis in the 2019 Finals in Madrid, missed the Australian Open and was not able to play again until the tours resumed, after a pause for the pandemic, the following August.

He has been playing better in recent weeks – pushing third seed Zverev close in Indian Wells and taking Stefanos Tsitsipas to five sets in the first round of the US Open. But he is not sure that is good enough for selection into captain Leon Smith’s GB squad.

“I also don’t feel right now I would be playing, either,” he said. “Obviously that would be up to Leon, but I’m not sure I deserve to play in that team.

“Cam [Norrie] and Dan [Evans] have had a great year. Liam Broady’s in and around the top 100 now and we’ve got very strong doubles as well.

“Right now, I’m not planning on playing the Davis Cup and with the late finish to it, and early departure to Australia, with my schedule between now and the end of the year, I am going to have to rest and take a break and give my body a chance to breathe.

“And I want to make sure in the off season I get to spend as much time with my family as I can because I have been away from that recently and that will be case when I go to Australia as well.”

Murray – currently ranked 121st in the world – has accepted a wildcard to play in Antwerp and Vienna over the next two weeks, but says his schedule will depend on his body and his levels of fatigue.

Great Britain will play France and the Czech Republic in Innsbruck in the group stages of the Davis Cup on 27 and 28 November, but the competition does not finish in Madrid until 5 December.

That is just three weeks before players are expected to have to travel to Melbourne to begin some form of quarantine before the Australian Open.

Murray said he was “disappointed” following his defeat by world number four Zverev, but added he could take positives from the match.

He raced to an early break before Zverev settled into his play and took the first set.

There was a repeat in the second set, as Murray took the first break then allowed Zverev to take back control, only for the German to display some uncharacteristic mistakes as former world number one Murray forced a tie-break.

From there, 2020 US Open finalist Zverev was able to take the crucial points, but was quick to pay tribute to his opponent after the win.

“He’s the only one of the Big Four that I hadn’t beaten yet, so I’m happy that I’ve done it,” he said.

“I always stayed in the match, even though I was down a break in both sets. I always knew I had a chance. The second set was an extremely high level from both of us. It could have gone both ways.

“It was a fantastic match. Andy played extremely well, maybe as well as he’s played since the [hip] surgery. I hope he continues playing the same way, because tennis did miss him for a long time and it’s good to have him back.”

It is the first time since 2016 that Zverev has reached the Indian Wells fourth round, where he will play French 14th seed Gael Monfils.

“The positive for me to take from it is I had opportunities again,” said Murray.

“I didn’t feel like I played a great match and still had chances, so that’s positive. But I’m disappointed because I want to be winning these matches. I haven’t in the past few months.”

Elsewhere, Greek world number three Tsitsipas will play Australian Alex de Minaur in the fourth round after recovering from a set and a break down to beat Fabio Fognini 2-6 6-3 6-4.

American Taylor Fritz caused an upset by cruising past Italian fifth seed Matteo Berrettini 6-4 6-3, while there were wins too for Nikoloz Basilashvili and Karen Khachanov.

In the women’s draw, the second, third and fourth seeds, Iga Swiatek, Barbora Krejcikova and Elina Svitolina, were all knocked out in straight sets, but Angelique Kerber and Victoria Azarenka progressed to the quarter-finals.