I was watching in awe 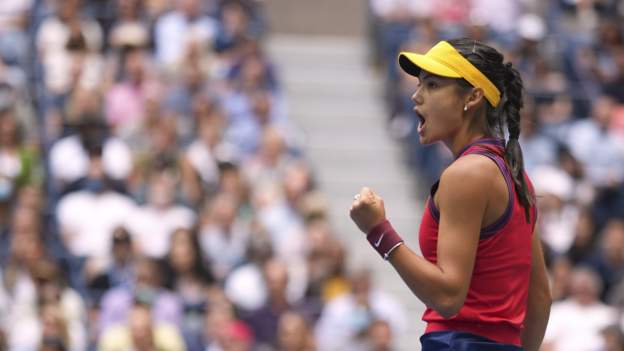 Emma Raducanu is currently in Indian Wells, where she will compete this week

Former British number one Johanna Konta was “watching in awe” as successor Emma Raducanu claimed the US Open title.

Raducanu, 18, has risen to 22nd in the world rankings after becoming the first qualifier to win a Grand Slam.

She is now in California, where she will compete as the 17th seed in the BNP Paribas Open.

“Because it’s never been done before, it’s going to be one of those captivating moments in sporting history,” Konta said of Raducanu’s win.

The 30-year-old told BBC Radio 5 Live: “I was watching in awe. She really took it in her stride. I can imagine Emma taking everything in her stride.”

Konta said “not knowing the gravity of the situation” may have helped Raducanu as she suddenly shot to global stardom, adding “there is some bliss in naivety”.

“She seems like someone who is very poised and aware of why she is doing what she is doing.

“She is incredibly bright and I think she applies that to her tennis as well. She’s an impressive young girl.”

‘My 2021 Grand Slams have been pretty rubbish’

Konta last played at the Western & Southern Open in August

Konta will not be playing in Indian Wells because of the groin injury that kept her out of the US Open at the end of an injury-riddled season.

She withdrew from the Grand Slam hours before her opening match having also missed Wimbledon because of a close coronavirus contact and the Olympics after contracting Covid-19 herself.

In February, Konta was forced to retire from her first-round match at the Australian Open because of an abdominal injury and has also had to combat a long-standing knee issue.

“The way my Grand Slam 2021 could be summed up is it was pretty rubbish,” she said.

“The body is taking a bit of a rest. Looking after it and doing my best to get it in a position to come back playing strong.

“I’m definitely not pleased, however I am a positive and generally happy person. There’s a lot to smile for so I keep that in mind.”

Having previously been ranked world number four, Konta has slipped to 82nd but says she has “never put a time limit” on her career.