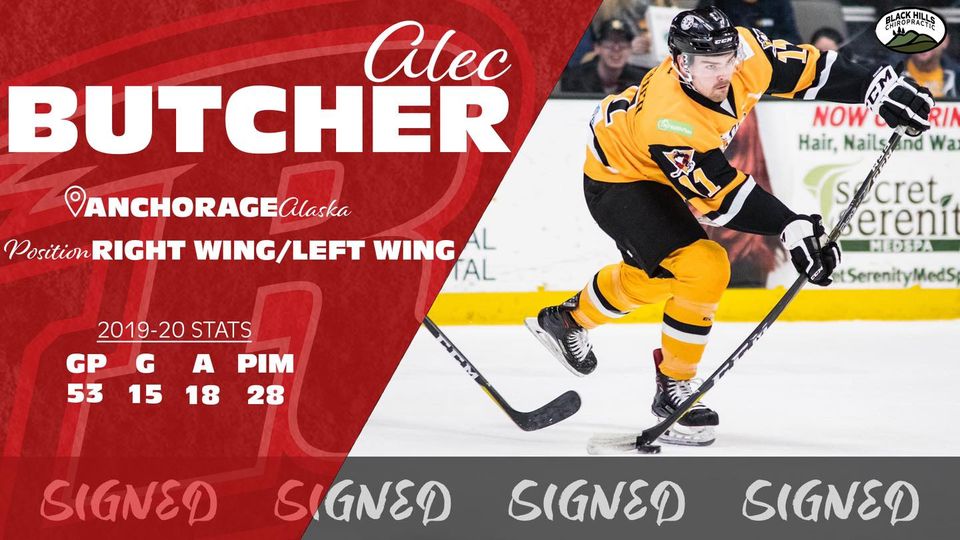 “I’m extremely excited to sign with the Rush,” Butcher said. “I’m looking forward to exploring South Dakota and Rapid City. The Black Hills are beautiful and I can’t wait to experience the area.”

Butcher heads to Rapid City for his third professional season. He appeared with the Wheeling Nailers for two seasons, both in 2018-19 and 2019-20 and has a combined 27 goals and 25 assists over 89 career ECHL games. In 2019-20, he had 15 goals and 18 assists over 53 games for the Nailers with his 15 goals and 33 total points each good for the third highest total on the team.

“Alec has the ability to put the puck in the net and will be looked upon to continue that here in Rapid City,” Rush Head Coach Scott Burt said. “After taking last season off due to COVID concerns, he has worked hard all offseason and is very eager to get going.”

Prior to turning pro, Butcher played three seasons at Sacred Heart University before transferring to his hometown University of Alaska-Anchorage for his senior season.

“Scoring is tough in this league and Alec has proven in Wheeling that he can do it,” Burt said. “We’re excited to land him.”

“I’m excited to see some new faces and be a part of the Rapid City Rush,” Butcher said. “I’m ready to go. Ready to hit the ground running and get to work.”