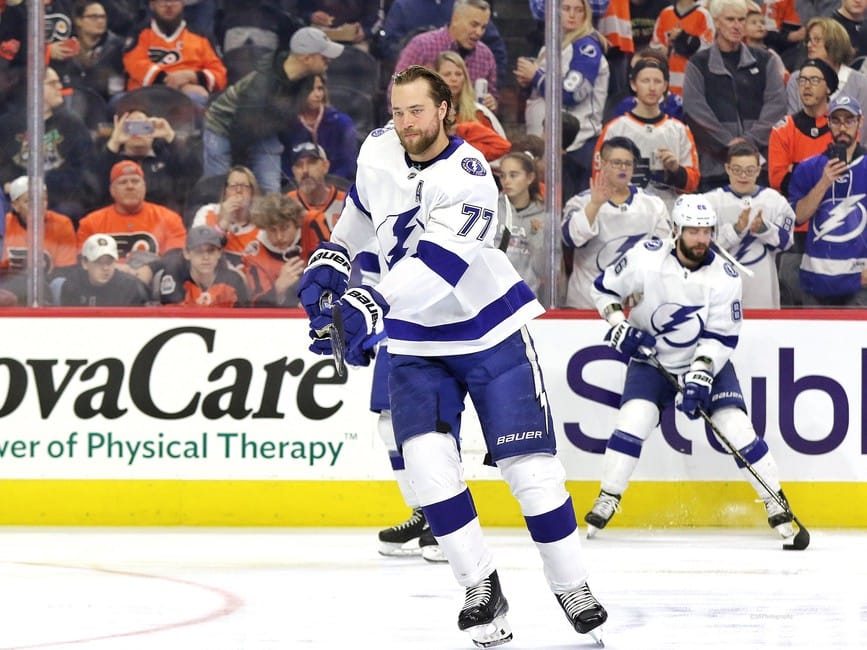 Welcome back to the fourth edition of this series, where I take on the daunting task of ranking the top 10 current players at each position in the NHL. In case you missed it, there have been three lists so far which have looked the center, right wing, and left wing positions. Today, I will attempt to do the toughest one yet, which will be ranking the top 10 defencemen in the NHL.

As mentioned in the other articles in this series, these lists are very tough to put together given how subjective they are. Nevertheless, they are fun to discuss as we prepare for a new season. With that being said, let’s take a look at who I chose to include.

Prior to the 2020-21 season, Arizona Coyotes defenceman Jakob Chychrun was considered by most to be a pretty average blue liner, and one that wasn’t talked about much due to playing in a small hockey market. However, that all changed this past season when he was able to really establish himself, scoring a career high 18 goals and 41 points in just 56 games.

Both Chychrun’s 18 goals and 41 points ranked second on the Coyotes last season, trailing only Phil Kessel. The 23-year-old, who was taken 16th overall in 2016, dealt with numerous injuries early into his NHL career, but has evidently overcome them and is developing into an elite defender. With his great 2020-21 campaign, there is much talk of him representing Team Canada at the 2022 Winter Olympics, though how he plays in the 2021-22 season will likely determine that. Regardless, he is turning into one of the best defencemen in the game, and is one of few bright spots on the Coyotes current roster.

While he may not have as much offensive flair as others on this list, at least not yet, make no mistake about it: Charlie McAvoy is one of the game’s best defencemen. The 23-year-old has become a major part of the Boston Bruins’ core, and will be in line for a massive raise in pay after this season, as his three-year, $14.7 million deal with an AAV of $4.9 million will expire.

In 2020-21, McAvoy’s 24:00 minutes in average ice time per game led all Bruins skaters by a wide margin, and his 30 points in 51 contests led his fellow blueliners. He is only continuing to get better and has some serious Norris Trophy potential in his future. It would surprise no one to see him take yet another massive step this upcoming season.

While he was by no means bad last season, Alex Pietrangelo’s first year as a Vegas Golden Knight felt like somewhat of a disappointment. The 31-year-old had a respectable seven goals and 23 points in 41 regular season games, as well as an additional 12 points in 19 playoff contests, but wasn’t quite the difference maker the organization felt they were getting when they signed him to a seven-year, $61.6 million deal last summer.

Despite the somewhat down year for his lofty standards, Pietrangelo remains one of the best defenders in the NHL, and it shouldn’t surprise anybody to see him be the player he was with the St. Louis Blues for so many years in 2021-22. He will be one of the biggest and most important pieces on a Golden Knights team that will once again be a serious contender to win the Stanley Cup.

During his time with both the Bruins and Calgary Flames, Dougie Hamilton was seen as a good defenceman with a ton of potential, though he failed to completely live up to it. That all changed when he joined the Carolina Hurricanes, where he quickly established himself as a great blue liner. In fact, had it not been for an injury midway through the 2019-20 season, he may have very well won the Norris Trophy, as he was a legitimate frontrunner at the time with 14 goals and 40 points in 47 games.

This past season, Hamilton was once again great with 10 goals and 42 points in 55 games. However, that came while playing on a stacked Hurricanes roster. The 28-year-old will have his work cut out for him now after signing a lucrative seven-year, $63 million contract on a team that has had some serious struggles in recent years in the New Jersey Devils. If he is able to bring the same level of play he displayed in Raleigh, then it should really help turn the team around, however that remains to be seen. It will be a huge season for him in terms of proving himself as one of the game’s best.

As mentioned previously, the Golden Knights are one of the NHL’s best, and a big part of the reason why is that they have not only an elite defenceman in Pietrangelo, but another in Shea Theodore. The 26-year-old was traded to Vegas from the Anaheim Ducks, who did so in order to ensure that Golden Knights management would select Clayton Stoner in the expansion draft rather than Sami Vatanen or Josh Manson, a move they surely now regret.

Since joining the Golden Knights, Theodore has steadily improved in each season, and has now gotten to the point where he is one of the games best. Despite that, he remains quite underrated throughout the league. Expect that to change in the near future, as he is a lock for Team Canada at the Olympics and will be on display for everyone to watch and realize just how special he is.

Putting John Carlson at number five on this list may be controversial, as many seem to discredit him due to the fact that he isn’t great defensively. With that being said, he is without a doubt one of the games best on the back end in terms of offensive ability, and is absolutely an elite level talent. In fact, it could be argued that he is the best offensive blueliner in the game, as his 189 points over a combined 201 games the past three seasons leads all his peers in that span.

Interestingly enough, through Carlson’s first eight seasons in the league, he broke the 40-point barrier just once. That all changed in 2017-18 when he put up a then career high 68 points, and he hasn’t looked back since. He went on to record 70 and 75 points in the following two campaigns, and had another fantastic year in 2020-21 with 10 goals and 44 points in 52 contests. He should continue to do more of the same moving forward on a lethal Capitals roster.

What a 2020-21 season it was for Adam Fox. Prior to his rookie season with the New York Rangers in 2019-20, there was some serious hype surrounding him after his great three-year college tenure with Harvard University. He lived up to that hype with a solid 42-point season, and had many thinking he could transcend into a star player. However, almost no one expected him to make the giant leap he did.

In just 55 games last season, the now-23-year-old Fox put up 47 points while also recording a plus/minus of plus-19. The outstanding campaign earned him a Norris Trophy in just his second year in the league, a truly incredible feat. Thanks in large part to the massive strides he made, the Rangers are expected to be a much better team in 2021-22, and it will be very fun to watch and see if he is able to once again improve on an already fantastic year.

Much like Pietrangelo, Roman Josi somewhat failed to live up to his extremely high standards in 2020-21. In his case though, a terrible team offensively in the Nashville Predators played more of a role in that than he did himself. In fact, his 33 points in 48 games led his team in scoring, proving just how much the forward group struggled to put the puck in the net.

Everyone in the hockey community knows how elite the 31-year-old defenceman is, and he was able to get rewarded as such by winning the Norris Trophy in 2019-20. Hopefully for his sake the forward group in Nashville is able to turn things around. If they can, he could very well be in contention for his second Norris.

Few players in recent memory have taken the NHL by storm in such a short amount of time like Cale Makar has. Sure, guys like Connor McDavid and Auston Matthews come to mind, but in terms of a defenceman, it is hard to think of someone who has established themselves as quickly as the 22-year-old Colorado Avalanche superstar. In just his first season in the league, he recorded 12 goals and 50 points in just 57 games, numbers which earned him the Calder Trophy.

Not that anyone was doubting him, but Makar was able to prove in 2020-21 that his rookie year was no fluke, as he had eight goals and 44 points in 44 games and was a Norris Trophy finalist. Through just 101 career games, he has a ridiculous 20 goals and 94 points. He hasn’t shied away in the postseason either, with 31 points in 35 contests. The scary thing here is that he is still likely a ways away from being at his peak. Combine that with the fact he plays on one of the best teams in the league in the Avalanche, and you have a guy who by the time his career is all said and done could have multiple Norris’ to his name.

It was tempting to put Makar at the number one spot on this list, but it was impossible to not have Victor Hedman, who has been the games best defenceman for a number of years now. The 30-year-old, who was taken second overall in 2009, took some time to establish himself at the NHL level, but became truly elite during the 2016-17 season, one in which he recorded a career high 72 points.

The very next season in 2017-18, Hedman was able to win the Norris Trophy. Somewhat shockingly, it remains the only one he has, but that could very well change in the near future. More importantly however, his great play has helped lead the Lightning to back to back Stanley Cups, and was recognized during the first Cup victory, as he was awarded the Conn Smythe Trophy after recording 10 goals and 22 points in 25 games. While he may not quite be a shoe-in yet, he is quickly building his resume to become a Hall-of-Famer, and should be able to continue putting up great numbers for a number of years on an elite Lightning team.

As I have mentioned throughout this series, feedback is both welcomed and encouraged in the comments section. Whether you believe any particular player is too high, too low, or think someone should or shouldn’t have been included, please let it be known below. Make sure to stay tuned in the coming days to the next edition, which will take a look at the top 10 goaltenders in the NHL.

Colton Pankiw is a former Jr. A hockey player who now provides his knowledge of the game through writing. He’s been a very active and reliable source for nearly two years at The Hockey Writers. He is a credentialed writer for the Calgary Flames but also does features on other teams throughout the league. Other writing contributions include: Oil On Whyte, NHLtradetalk.com, and Markerzone.com. Colton is also a co-host of both Oilers Overtime and Flames Faceoff podcasts. Any interview requests or content info can be made through him on Twitter. Take a look at his work here.