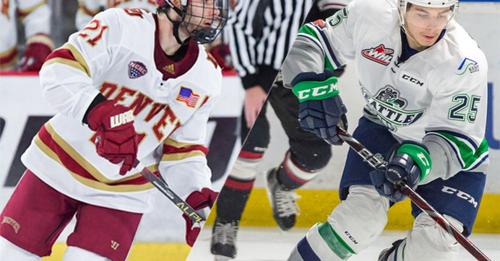 Davies, 23, enters his first pro season after a four-year college career at the University of Denver. The durable defenseman from St. Louis, Missouri played 159 games from 2016-20 and served as an alternate captain as a senior. Davies posted a career-best 17 points as a freshman in 2015-16, while helping the Pioneers to the National Championship.

“I’m really excited about the opportunity to come play in Kalamazoo,” Davies said. “I’ve heard nothing, but great things about the program and the fans. We’re going to have a great team this year and I’m really looking forward to getting started here in a few weeks.”

“Michael comes to us from a winning culture and program,” Bootland said. “He has a high hockey IQ and a high-end skillset. He is a great skater with awesome escapability.”

Williams, 20, turns pro after four junior seasons in the Western Hockey League. The Delta, British Columbia native recorded five goals and 15 points in 24 games during a pandemic-shortened 2020-21 season with the Swift Current Broncos, where he was an alternate captain. He previously spent parts of three seasons with the Seattle Thunderbirds after initially debuting in the WHL with the Regina Pats.

“The Kalamazoo Wings are a first-class organization and I am very excited to have the chance to be a part of it this upcoming season,” Williams said.

“Owen is a big, young WHL defenseman with a huge upside,” Bootland said. “He played in every situation for his team and was a great leader. He is hungry to make an impact at the pro level.”

The K-Wings open the 2021-22 season at 7 p.m. on Saturday, October 23rd against the Toledo Walleye at Wings Event Center.