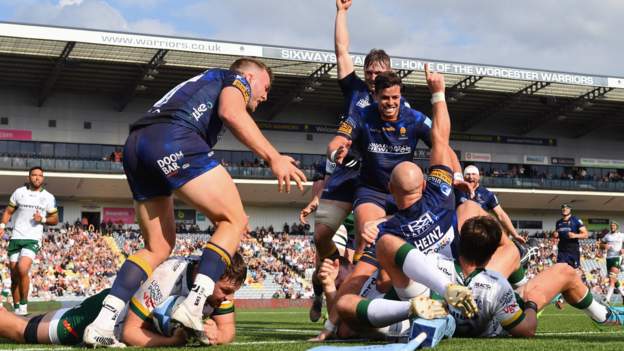 Worcester Warriors opened their Premiership campaign with victory over a resilient London Irish at Sixways.

Ollie Hassell-Collins went over to get the visitors going but Worcester responded through Sam Lewis.

Willi Heinz scored on his Warriors debut while Melani Nanai went over for the hosts just before half-time.

Worcester included seven summer signings in their squad for the season opener, with England scrum-half Heinz getting off the mark on his first Premiership appearance for the club.

The hosts suffered a miserable campaign last term, winning just once – against Irish on the opening day of the season – with the rest of the Warriors’ victories declared due to the impact of coronavirus.

Likewise, Irish lost the last six games of the 2020-21 season and had looked to get back on track with their trip to Sixways, however, they struggled to match Worcester’s first-half tempo and lost Ben White to the sin-bin on 32 minutes for a high tackle.

Tuisue’s second-half try was given after being taken to the Television Match Official, but Paddy Jackson’s wayward kicking ensured Worcester kept their nine-point cushion.

However, Hoskins’ double as the game drew to a close ensured that the visitors finished strongly and claimed a bonus point for four tries, but it was not enough to undo Worcester’s good work earlier on.

“I thought Willi was exceptional. He is a really experienced player, with his Crusaders background in New Zealand and international rugby. His personality is one that he wants to help people grow.

“First and foremost, at the start of a season, a win is very important, and a bonus point is the cherry on the cake.

“It was a start. We are not getting carried away with that at all. There is a huge amount of growth and much more to come as a team.”

“You can see a lot of the good things we did today and the scores we conceded, we can manage those.

“We got four tries and probably left one or two behind.

“It is a great league and there is no place for hiding. Errors are errors and these things happen, but I thought our attitude was spot-on.”