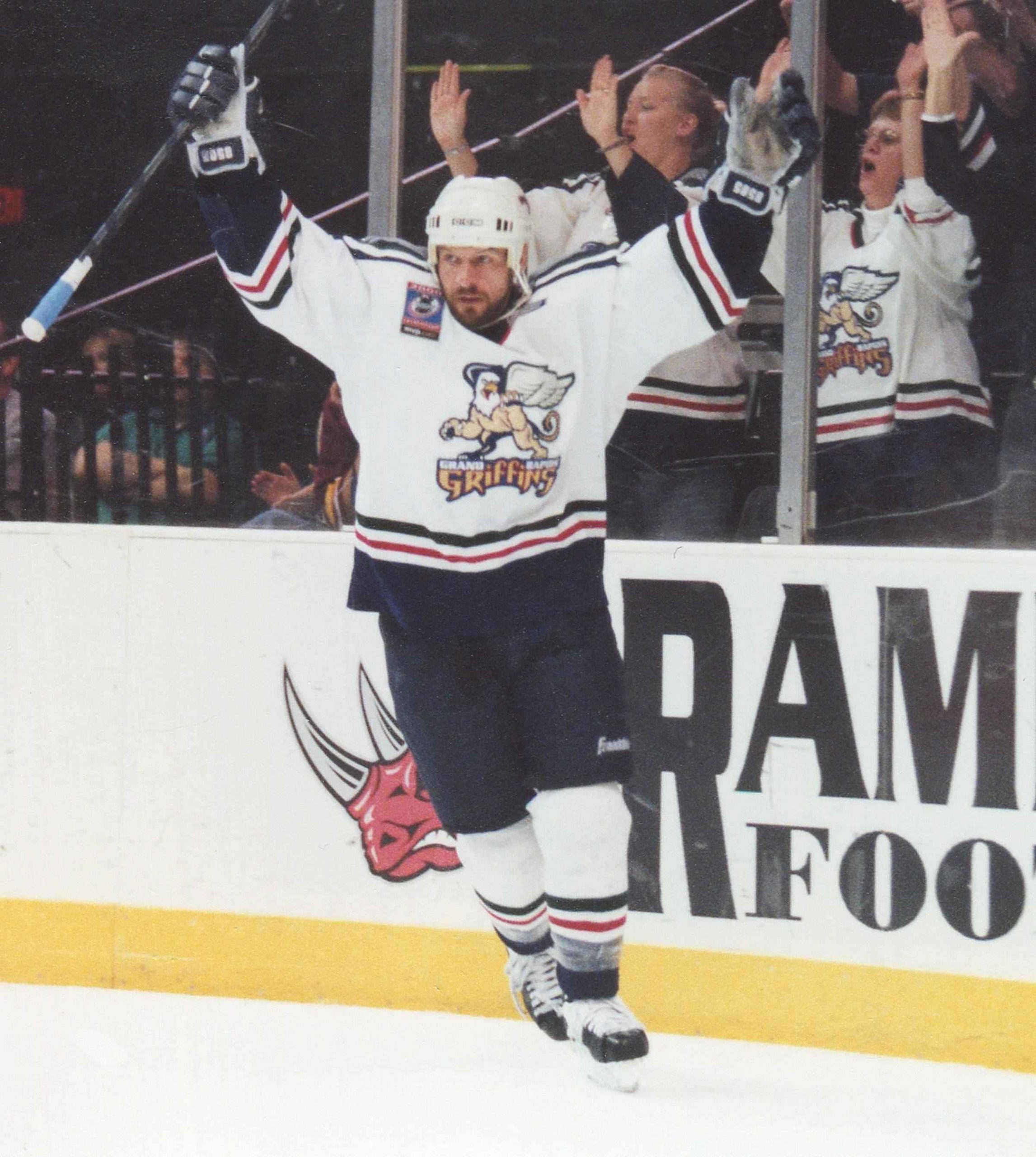 GRAND RAPIDS, Mich. – The Grand Rapids Griffins on Thursday announced that the jersey numbers of all-time greats Michel Picard (7) and Jeff Hoggan (10) will be retired in separate ceremonies that will take place at home games during the second half of the 2021-22 season.

To date, defenseman Travis Richards (24) – who played during each of the Griffins’ first 10 seasons (1996-2006) and is the team’s all-time leader in games played – is the only player in franchise history who has had his number retired and raised to the Van Andel Arena rafters.

“Our 25th anniversary season gives us the perfect opportunity to recognize the lasting accomplishments of two players who made an immense impact on our franchise,” said Griffins president Tim Gortsema. “Michel was an offensive powerhouse during our team’s early years, achieving many statistical benchmarks that haven’t been approached by any of the other 537 players who’ve worn a Griffins jersey, and he carried himself with grace and class both on and off the ice. And Jeff, during his four seasons as our captain, provided unparalleled leadership and character in forming the cornerstone of a culture that secured our first Calder Cup championship in 2013, and he founded an unprecedented era of team success that continues to this day.”

Picard’s number will be retired in a pre-game ceremony on Saturday, Feb. 19, with Hoggan’s celebration following on Saturday, April 2. Tickets for both games can be purchased now at griffinshockey.com/buytickets.

After making his Griffins debut alongside Richards in the team’s inaugural game on Oct. 5, 1996, Picard went on to play 364 games over six seasons with Grand Rapids (1996-00; 02-04) and still ranks as the Griffins’ all-time leader with 158 goals, 222 assists, 380 points, 40 power play goals and 26 game-winning goals. Beginning in 1996-97, when his 101 points (46-55—101) made him the first and only Griffin to date to hit the century mark, he led the team in scoring in each of his five full seasons, something no other Griffin has done more than twice. Among Griffins who’ve played at least 100 games, his scoring average (1.04 points per game) stands first while his goal average (.43 goals per game) ranks third.

Picard helped the Griffins claim division titles in both 2002-03 and 1999-00, when he led the team in scoring during both the regular season and playoffs on its way to a berth in the 2000 IHL Turner Cup Finals. An owner of 14 franchise records, Picard was named a IHL First Team All-Star in 1997 and an AHL Second Team All-Star in 2003, in addition to representing Grand Rapids in the 1997 and 1998 IHL All-Star Games.

Signed as a free agent just prior to the 2012-13 season, Hoggan became the longest-tenured captain in franchise history (2012-16). He led the Griffins to their first Calder Cup title that season – the team’s first championship in its 17 seasons to that point – and to records of 8-3 in playoff series and 34-25 in playoff games overall. By way of comparison, Grand Rapids had an 8-10 series record and a 45-47 mark in postseason games over its first 16 seasons. During Hoggan’s first three playoff campaigns (2013 to 2015), the Griffins played 50 postseason contests, the most by any AHL team over a three-year span in league history, and he remains the only AHL player since at least 2005 to captain his team to least one playoff series win in four consecutive seasons. The three teams to defeat Grand Rapids in the postseason during his tenure all reached the finals, with Texas (2014) and Lake Erie (2016) winning the cup and Utica (2015) finishing as runner-up. During the 2015 Western Conference Quarterfinals, the Griffins became the 11th team in AHL history to win a best-of-five series after trailing 0-2, rallying to knock out Toronto. 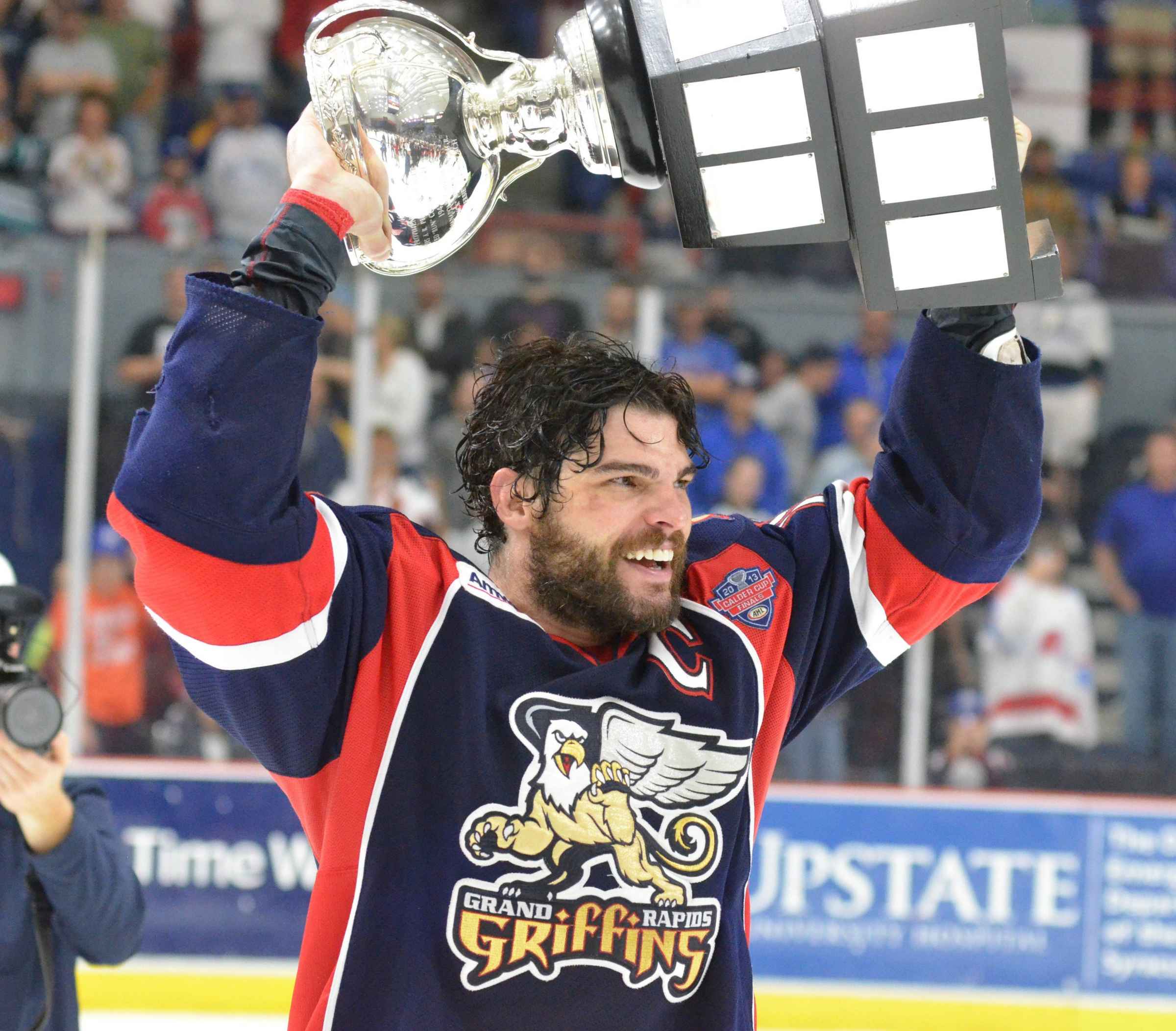 In 2014-15, Hoggan won the AHL’s 2014-15 Fred T. Hunt Memorial Award as the player who best exemplifies the qualities of sportsmanship, determination and dedication to hockey. The following season, the Griffins posted separate winning streaks of 15 and 13 games, becoming just the second AHL team in 25 years with two double-digit winning streaks in the same season. Hoggan, who helped the team claim division titles in both 2014-15 and 2012-13, served as the Western Conference’s captain at the 2016 AHL All-Star Classic, and he mentored more than two dozen players who eventually advanced to the Detroit Red Wings. Upon his departure, he ranked among the team’s all-time playoff leaders with 59 GP (T1st) and 27 points (T4th), numbers that today still tie for fourth and stand 10th, respectively, in team annals.