India vs England: Michael Vaughan describes Ollie Pope as a... 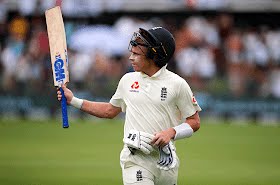 Former England captain Michael Vaughan described England batter Ollie Pope as a player of sheer class after the latter top-scored with 81 on Day 2 of The Oval Test. Thanks to Pope’s efforts, England recovered from a precarious 62 for 5 to post a healthy 290. They thus gained a significant first-innings lead of 99. India ended the day on 43 for no loss.

Praising Pope, Vaughan told Test Match Special, “He has been sporadic in Test cricket. That is the first time I’ve watched him and thought ‘there is a player of sheer class in Ollie Pope’. He played beautifully.”

The youngster, who struggled during the tour of India, featured in significant partnerships with Jonny Bairstow (37) and Moeen Ali (35) to put England back on top. Vaughan further said about Pope, “I have seen Pope play some nice knocks, particularly that hundred in South Africa. We haven’t seen enough in matches or behind the scenes to suggest he is a superstar in the making, but from what I saw today he could be.”

Pope was looking good for a hundred but perished for 81, dragging Shardul Thakur on to the stumps. Speaking to BBC Sport, Pope admitted that he was pretty gutted to get out.

“I worked hard. I felt really good and was disappointed with the shot I played to get out. It is bittersweet, but I’m happy with my contribution,” he admitted.

Pope got a chance to make a comeback in England’s middle-order after Jos Buttler skipped the Test to be with his wife for the birth of their second child. Jonny Bairstow took the gloves, allowing Pope to come in.

“Hopefully I can build on today and it’s just the start of a good run. You see the hunger from the guys at the top and they are never content with where they are. I’m going to do everything in my power to get right to the top of my game,” Pope added about his performance.

On the match situation, the youngster admitted that things won’t be easy on Day 3 given the smooth nature of the wicket for batters. He added, “We might have to toil a bit longer for our wickets. Hopefully we can get our rewards. We’ll back ourselves if we are set a decent total to chase because it will still be a good pitch.”

The five-match India-England series is currently locked at 1-1.

–By A Cricket Correspondent