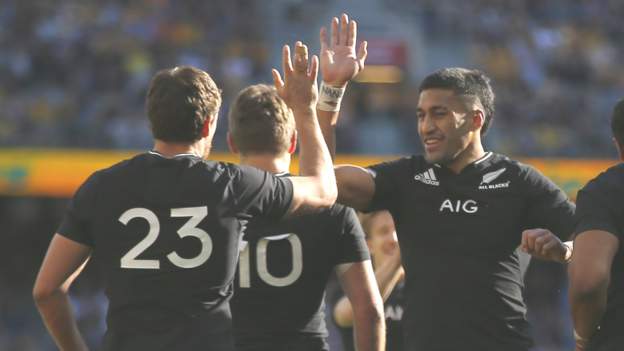 New Zealand continued their impressive start to the Rugby Championship as they completed a Bledisloe Cup whitewash of Australia with a 38-21 win in Perth.

The All Blacks led 18-0 at half-time, despite being reduced to 14 men for 20 minutes as Jordie Barrett was sent off, going on to seal a bonus-point victory.

New Zealand beat the Wallabies 57-22 in the Rugby Championship opener a week after their first Bledisloe Cup win.

Australia coach Dave Rennie was angered by the postponement of the third match.

The fixture was originally scheduled to take place on 28 August but New Zealand did not travel because of new coronavirus restrictions in the country, with Rennie saying his players found out about the postponement on social media.

During the game, Barrett’s red card for a boot to the face of Australia wing Marika Koroibete while jumping to catch a kick may have further fuelled the Wallabies’ fire.

Under a law being trialled in the Rugby Championship, a player who has received a red card can be replaced 20 minutes later and Damian McKenzie’s arrival brought New Zealand back up to 15 men.

The hosts could not capitalise on the numerical advantage in the interim and three second-half tries were not enough to compete with the All Blacks’ dominance.

The visitors’ victory is all the more impressive given regular captain Sam Whitelock and first-choice backs Richie Mo’unga and Aaron Smith all remained in New Zealand for the birth of their children.

“We just had to nail our job … and I’m just proud of the boys today to get the job done,” said Ardie Savea, who took on the captaincy in Whitelock’s absence.

“Just shows the depth of our team.”

New Zealand are top of the Rugby Championship table after two games and host Argentina on 12 September, when Australia play in South Africa.