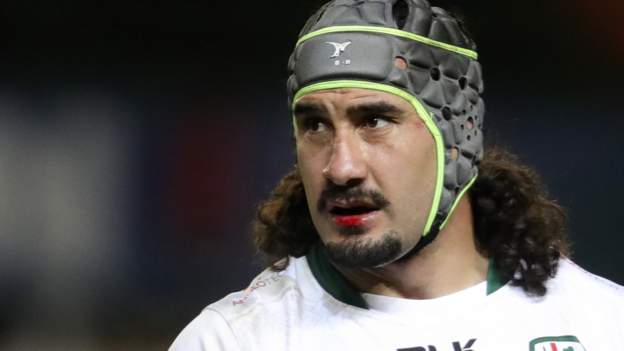 Blair Cowan made 153 appearances for London Irish in eight years

London Irish have released back-rower Blair Cowan from his contract in order for him to take up a playing opportunity in Japan.

The 35-year-old Scotland international departs after eight years with the Exiles, in which he scored 26 tries in 153 games.

Cowan joined from Worcester in 2013, having previously impressed at Championship side Cornish Pirates.

“Blair has made an invaluable contribution,” boss Declan Kidney said.external-link

“We’re disappointed he is moving on, but we felt it was only right that we allowed him to pursue this opportunity at this stage of his career.”

Cowan added: “This is the hardest decision of my career to date. It’s very rare for opportunities like this to come to someone at this stage in their career.

“When my wife and I had to write a leave-and-stay list, the list to stay at this club was too long for the paper.

“There was one point on the leave column, and that was family. At the end of the day, family trumps all.”